2020 has been an absolutely garbage year for plans. While not a day passes where I don’t recognize how incredibly fortunate Sara and I are to have stable employment, a home, no struggle to help kids figure out how school works, and so on, we desperately miss evenings at home having dinner and games with our friends. Back in February, we’d met for drinks with two other couples, and the idea of playing D&D came up (I’m going to leave their names out of it to protect their reputations, but they know who they are, and they know what they did).

One couple had tons of experience, the other had none, and we decided that a couple of weeks later we’d meet at our place and roll up some characters. I was a little leery of diving into 5th Edition with folks who’d never played a tabletop RPG before, so I decided instead to introduce everyone to Dungeon World. DW is a role-playing game that leans far more heavily toward the narrative side of RP, with very little math or tactics.

It was great; we spent an evening with food and drink building a ridiculous world and a party of characters consisting of a suave, romance-novelesque swordsman, an exiled barbarian prince, a power-hungry rogue who’d made a few too many mistakes in her life, a perpetually naked ranger, and an elven bard trying desperately to figure out how to direct them toward heroism so that she could then tell their tales.

After we’d met for only one session in person, the world shut down. While we all got our bearings on what the next weeks would become (which has since turned into unending months), our DW game fell away. After a month or so, I asked the group if they’d be willing to take the game online so that we could all have some structured social interaction. Dungeon World is almost all conversational; there’s rarely a map of any significant value, and there’s no reason to have a battle map and miniatures. Character sheets have everything a player needs to play, and the primary mechanism for rolling results is just a roll of 2d6 plus a relevant stat. Best of all, DW doesn’t require prep work on the part of the GM; you play to find out what happens, and everything important in the game happens at the table. I bribed them with salmon and grilled veg dropped at their doorstep, and everyone was on board.

It was ridiculous, and exactly what we’d all needed. In the following weeks, we attached a permanent porch-potluck to the game—one couple responsible for the main, one for drinks, and one for dessert. We’re currently trying to remember everything we’ve contributed to collect into a cookbook for our own keepsake.

In DW, players are as responsible for coming up with the game world as the GM is, and after nearly twenty sessions we’ve come up with gems like The Randy Giraffe and The Snuggly Ostrich—two rival taverns that go to war with one another as the city of Bagnan (their current home) burns; The Festering Scar crime syndicate run by Steve the Crime Boss who sows chaos against the city lead by Lord Marsten, who looks exactly like Mike Hot-Pence (Google it if you don’t have a picture in your head—it’s worth it); a main character currently using a broken piece of cursed obelisk to replace his shrunken manhood (he calls it his ‘Ob piece’); holidays that revolve around giving the barbarian prince presents that he can refuse resulting in immediate banishment from the land of Barbaria (spelled ‘Barbarea’ for those in the know); and most importantly, hundreds of hours of laughter and entertainment telling stupid stories about made-up heroes in a world where nothing is planned, and things rarely make sense.

Seriously, the best thing that came out of this year has been our group meeting online, sharing dinner and drinks at a distance, and laughing ourselves hoarse while we can’t be together in person. I love my friends; they’ve seriously given me one of the only things in 2020 that I look forward to.

Designed by: Sage LaTorra and Adam Koebel
Player Count: 2+ (recommended less than 20)
Playtime: A lot of minutes
Time to Learn: 10 minutes for players, more time for GMs
Replayability: 5/5
MSRP: $10 (though, the game has been released for free via Open Game License)
Am I happy I bought it?: So, so happy. Definitely the decision to put it to use this year was a wonderful one.

Written by Brendan Quinn; President of Tri-City Area Gaming. We’re playing games on Discord while COVID’s keeping us home, come play with us! 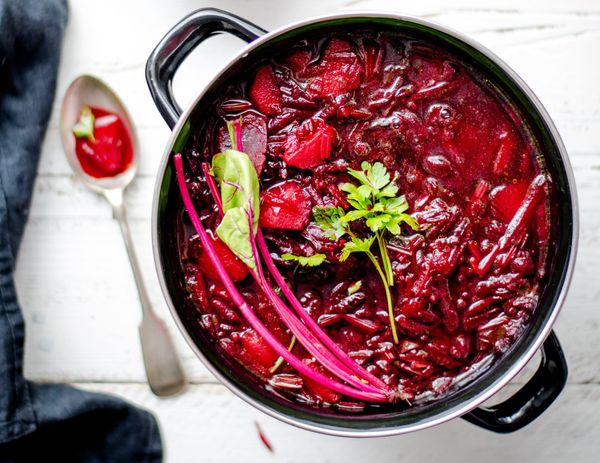 “Borscht is believed to have originated in Ukraine but is enjoyed all over eastern Europe, with each country and each cook putting their own twist on the recipe. This means as long as you keep the main ingredients similar, you can make your own ‘traditional’ borscht.”