The magical utopia of Ceres and its inhabitants, the Aura, have been a well-guarded secret until now...

Farrah Andromeda is taking charge of her life outside of the Sanctuary of Ceres. A headstrong Aura PI, she spends most of her day chasing cheats and scoundrels. When a young Aura goes missing, Farrah is determined to bring the family the answers they crave. Even if she has to suffer the oversight of sexy Security Force officer Donovan Mars to do so.

When Donovan Mars is summoned by a member of the Ruling Four, the last thing he expects is to be partnered with Farrah Andromeda. Known for her reckless behavior and lack of decorum, Farrah is the exact opposite of what Donovan would want in a partner. He is determined not to be distracted by her beauty and unexpected charm.

Can the two avoid setting their world on fire as the mystery unfolds and sparks between them begin to fly?

Excerpt from Ferocious: A Secret of Ceres Novel by Stella Williams

“I have no idea what you are talking about.”

Farrah tried plausible deniability. She didn't have to work hard. Donovan Mars was attractive to her, but she wouldn’t touch that stick in the mud with a ten-foot pole.

Jaq started to chuckle as he finished putting the groceries away.

“Funny, he said the same about you. Regardless if that were true, why is he at your door right now?”

Farrah opened her mouth to say something, but there was a knock at her door followed by a small flare of energy announcing that Donovan was in fact at her door. Jaq was closer than she was so he opened the door with a scowl on his face.

“You two need to find that pole you keep talking about because neither of you has one.”

“How dare you approach my brother without notifying me!”

“And risk you warning him I was coming? What kind of investigator would I be then?”

“I’m not saying you shouldn’t have talked to him, but I am supposed to be your partner on this case. It would go a lot smoother if you let me know what leads you’re working. That way we aren’t doing twice the work for no reason other than your big ego!”

“My ego? This is not about my ego. This is about you being related to the suspect!”

One of Farrah’s neighbors poked their head out of their door and turned to look in their direction. Farrah smiled and waved at the old woman before grabbing Donovan’s collar and pulling him inside. The last thing they needed was to have anyone whispering about what they were up to. Farrah slammed the door behind them and leaned against it.

“My brother is not a suspect. He had nothing to do with Daphne’s disappearance. You know that,” Farrah said.

Her hands fisted at her sides.

“Your judgment can’t be trusted.”

Her nails bit into her palms as she fought the urge to smack the smug look from his face.

“My judgment about my brother or my judgment in general?”

“Jaquis Andromeda stays a suspect until we find evidence otherwise.”

Farrah glared at Donovan. He glared back. Farrah’s blood boiled with rage. She could feel the energy rising up from her core and dancing just below her skin. At this point, it wouldn’t be enough for her to just calm down. She needed to redirect and focus that energy into something else, or better yet, someone else. Without a second thought, Farrah launched herself from the door and right at Donovan. He didn’t have time to react before she pulled him down and pressed her lips to his. His facial hair tickled her chin and cheeks.

Donovan tensed for a moment. Farrah knew he would try to pull away and that was fine. It was only meant to be a chaste kiss. A way to channel her angry energy into something more pleasant and leave him the one on edge. Farrah wasn’t expecting his strong arms to encircle her waist and pull her flush against his rock-hard body. Nor did she expect him to open his mouth and nip at her lip. Not out of anger, but an invitation. He moved his head back far enough to look her in the eye.

Donovan was angry, but the fires of passion danced in his eyes. Both of them stood stock still, trapped in the heat of the moment. Farrah’s chest heaved as she warred with the dual sensations of fury and arousal. She knew Donovan did the same. Their natural energy swirled around them. They mixed and intertwined until Farrah could barely distinguish hers from his. Donovan bent lower, his lips were just shy of hers. So close she could feel his warmth against them.

He made no further move. Leaving the next step up to Farrah. All she had to do was lean in. Her body screamed for her to go for it, but Farrah’s mind shouted for her to stop, to pull away. For once Farrah decided to listen to her brain. Her hands that had been gripping Donovan’s shirt fell to her sides.

Farrah closed her eyes and took a deep breath. She could feel the charged air dissipating as the heat drained out of the moment. Her body wept for the loss of opportunity, but there was nothing Farrah could do about that now. She had to remember Donovan was not someone she could be that open with. Not now and not ever. She opened her eyes and playfully tugged Donovan’s beard.

"Did you bring the case file?"

Donovan didn’t miss a beat. He smirked and pulled the file from the shoulder bag she just realized he wore. She reached for it, but he held it out of her grasp.

“You show me yours, and I’ll show you mine.”

Stella Williams is an arts activist and romance author. www.serpentinecreative.com 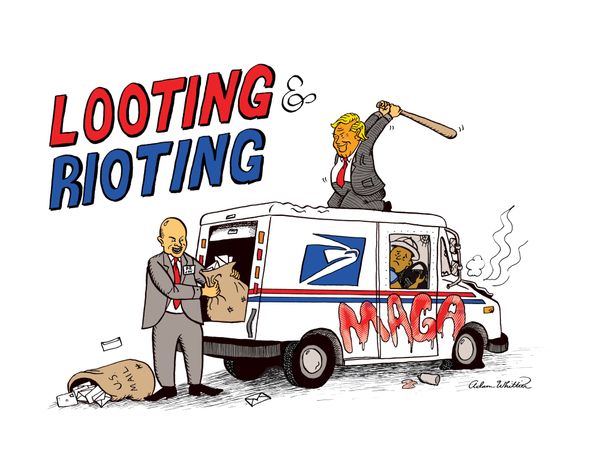 Adam Whittier is a cartoonist based in Richland. Find him at adamwhittier.com or follow him on Instagram: whittier_comix 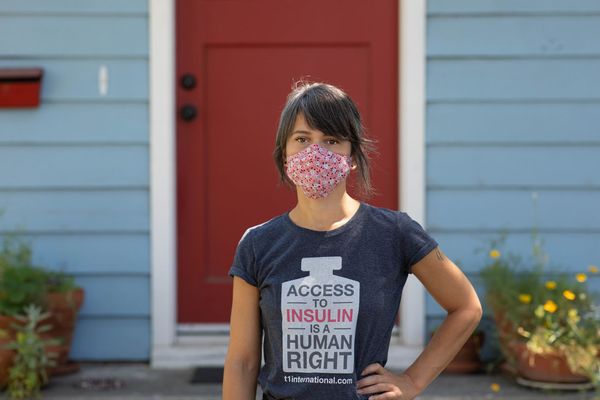 We rounded up some art for your weekend enjoyment!