On August 2, 2020, the Tri-Cities art community lost one of their own. Douglas Paul Gast was an integral part of the art scene here, where he filled multiple roles. Many knew Doug from his role at WSU Tri-Cities, where he was an Associate Professor of Fine Arts and the Director of the Digital Technology and Culture (DTC) degree program. Others knew him from his work with the Richland and Kennewick Arts Commissions, to which he contributed for more than a decade. Still others knew him as an artist whose work has been exhibited in local galleries, across the country, and throughout the world. As a tribute to Doug, Tumbleweird has invited local artists to reflect on his many contributions to our community.

I feel fortunate to have sat through Doug’s courses. Doug taught me the importance of being an educator. He helped me to be self-critical about my own photography work and encouraged me to explore the true potential I have within the art community. He was one of many vitally important mentors that have helped me form my career. If he were here today, all I would like to say to him is “Thank you.”

I was privileged to have Doug Gast as professor during the first DTC classes offered at WSU Tri-Cities. He was such a great person, friend, and mentor who helped mold my creative direction before and after school. He had this calmness about him where in stressful moments, second guesses, and strife you would still walk away with a calmness and idea of how to move forward. He never gave answers to ‘problems’ but a guidance that projected confidence or a nod as if to say “change it.” Either way, he listened and really took in what you were saying. I appreciated that as a student and friend. Rest easy, Doug.

Doug Gast was integral to growth of the art scene here in the Tri-Cities. I would not be the artist I am without his ideas and art over the years. And DrewBoy Creative would certainly not be in existence without his support and the artists he taught at WSU Tri-Cities. What sticks with me the most is the last show I did with Doug. He knew that after curating dozens of art shows over the years that it would be nice for me to simply participate in one as an artist. It was a nice gesture, and I was honored to be included in Spectra Art Gallery’s Pandemic! A Novel Art Show with him. That art show helped me remember why I make art. The Tri-Cities’ art scene is better because of him, and he will be missed.

I first met Doug in a non-art capacity soon after they moved into their home in Richland. He promoted many exhibition opportunities for local and regional artists and brought in other notable exhibits to the area. He conducted informational meetings concerning art and art education at WSU Tri-Cities. His work on the city’s Arts Commissions made the cities better places. I am truly saddened by Doug’s passing.

I met Doug while in the DTC program at WSU. He was the first professor in four years of college to take my desire to be a full-time photographer seriously, and  he also didn't belittle my self-taught skills and knowledge of the seven years prior to meeting him. Over my three years at WSU, Doug offered me so much sound advice on being an artist and running a business in a small town. He was upfront about the struggles I would face but didn't tell me not to do it. He encouraged me before and after graduation, and even as recently as June was keeping in touch to see how things were going. He deeply cared about the success and well-being of all of his students, and I am so grateful to have known him.

Doug Gast was one of my professors in university. I appreciated the way he encouraged me as an artist and gave me opportunities to both grow and thrive. There are two things that stand out to me as I think about Doug:

I am praying for God’s comfort for Doug’s family and close friends in the wake of this great loss.

Sometimes you meet people at the right time in your life. You don’t really know it until later on, a gift in and of itself. Five years after graduating from WSU Tri-Cities, I can place Doug Gast on the list of people who shaped and altered my life in a dramatic way. I just wish I had told him in person.

I often wonder if my life trajectory would have looked different if he hadn’t told me I was an artist. He knew that about me way before I ever did. I just thought I liked art. I was a senior in 2014 and I had decided very late into my degree to double major in psychology and digital technology and culture. With that came two cornerstone classes to take and a sense of panic that is hard to explain. When we met to discuss my options, he decided I should curate an art show on campus. I was blown away by such a proposition because I had zero experience in the area, and I was still discovering what art even was to me. But by spring, I had curated the first student-led show on campus and created my own series to be part of it. He said I had a knack for telling stories and I would figure out how to pull it off. So I did. He supported me in every way he could while allowing me to figure it out on my own. He defended my art selection and show theme, even when it cast waves through the campus. He wanted students to keep pushing the boundaries and show our community that art could be so much more.

Doug had an ability to push students outside of their boundaries, encouraging us to be ourselves in our truest of forms, especially in our art. He gave space to students who maybe thought there was no space for them, like me. It felt like everyone in our classroom knew they had purpose and were contributing to the art world. I don’t think many professors or teachers possess that ability to make a whole room feel valued at once. I carry his kind words about me everywhere I go and honor them in everything that I create. He leaves behind a legacy of mentorship, encouragement, and a dare to discover the true artist that is in all of us.

I first met Doug at The Parkade in Kennewick, Washington in the year 2011 while I was working as a karaoke host at that bar. At the time, he was a regular with his wife and a mutual friend, Brandon. I was an aspiring photographer, and he gave me many tips regarding composition. He filled me with such motivation to take more pictures! We had many great conversations and spoke about life, philosophy, art, and so much more. He was a wonderful human being, and I will miss him greatly.

Doug’s willingness to accept me into the Digital Technology and Culture Program meant that I was able to finish my degree, something I never thought I would do. He was deeply committed to his students and always made sure that the university was working for us, and not the other way around.

Artists have an outsized role in the Tri-Cities, and Doug was no exception. He was always willing to assist, encourage, and enable other artists in their work. Inviting me to contribute to June’s Pandemic! art show is the most recent example, but he has also connected me with freelance projects, loaned me equipment, helped me negotiate pricing and contracts, and has been a friend in a sometimes inhospitable place. And I know that he's done this for others as well.

There’s this TED Talk I love by Drew Dudley where he talks about Lollipop moments. Moments where you do some small act of kindness and you are not even aware of the impact you can have on people’s lives. What true leadership is. Being kind, really listening, and helping people. Helping people when they are hurting. This man made my life better in enormous ways. They were way beyond lollipop moments. I wish I would have told him so.

Doug was a generous co-worker and artist. He allowed me to run with my ideas. He supported his co-workers and students. He especially had fondness for people who were struggling or had struggled in life, and believed in and encouraged them when others would have overlooked them. He brought so many wonderful interns into my life at WSU Tri-Cities: Madison Rosenbaum, Esther Orozco, Joey Jensen, Erin Sheriff, Melanie T-Rex Thompson, and Jason Watson, all who became dear friends—my art tribe.

With Doug’s help, Kristin Elsen and I curated a student art show. He made it possible to honor my father who passed away [from] cancer with an art show of his paintings at WSU Tri-Cities. He was on the hiring committee that hired me at WSU Tri-Cities and encouraged me with not only my design work but my artwork. He even helped make it possible to meet my fiancé, Luke Ray. I’m sad for this community; we lost someone dedicated to the Arts. Dedicated to students. Dedicated to people. He was an encourager. An encourager of arts and of people. Be sure to tell all those people who helped change your life for the better. And make some art!

Doug Gast introduced me to art as I understand it today. I would not be the artist I am today without the conversations, collaboration, and unerring support I received from Doug. I can’t deny that a memory of him will live on in my Art, and deep in [my] heart near my most important beliefs until I die. His engagement with the art community is reflective of what all artists ought to strive for. A great artist, and a true teacher—he will be dearly missed.

Learn more about Doug’s art on his website: noprogram.org.

In lieu of flowers, memorials may be made by mail to the Douglas P. Gast Scholarship and Travel Fund in Fine Arts and Digital Technology & Culture Endowment # 7246-0127: foundation.wsu.edu/give (Type “Gast” in Search). Memorials may also be made to the Tri-Cities Animal Shelter at 1312 S 18th Avenue, in Pasco. 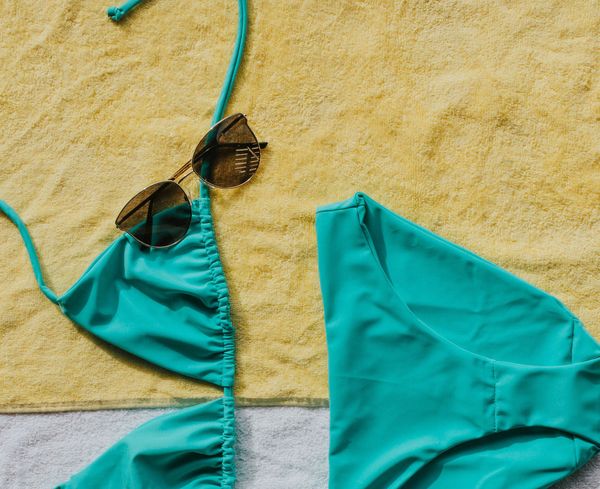 “I know I would be healthier if I were thinner, and I know I have to take responsibility for my body and my health; I just wish I could somehow disconnect my feelings about my outer shell with my inner self-worth. I have to learn that I am beautiful in my own way...” 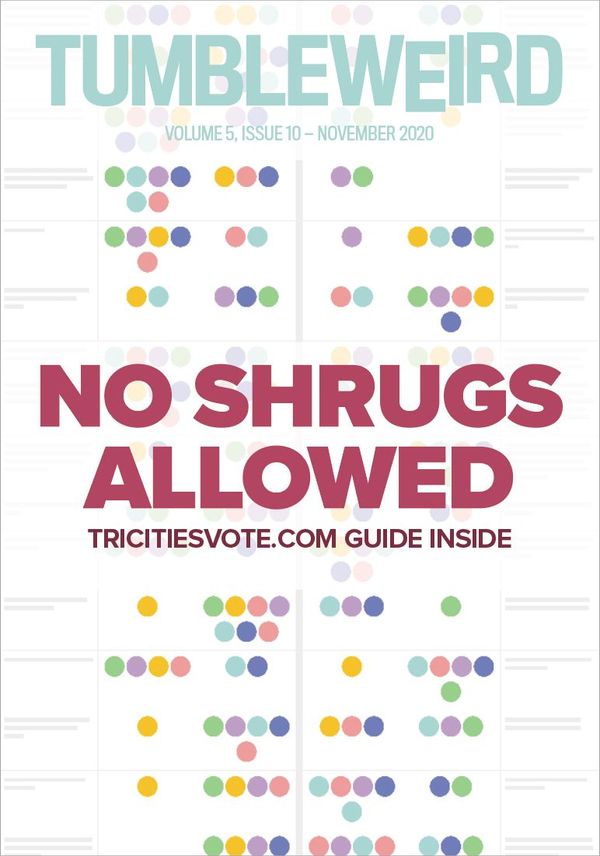 "No shrugs allowed for voters or candidates—just decisions."