Gia had read the statistics: The life expectancy for Black transgender women was between 30 to 35 years. So when she was 15, Gia started telling her mom that her life was halfway over.

“When she was mustering the courage to tell us that she was trans, she turned to YouTube, like so many kids do,” Fisher told The 19th. “And all she saw were mostly negative depictions.”

Gia is hardly alone in this experience. With a lack of resources at schools and home, many trans kids discover the transgender community through social media like Instagram and TikTok, where many share that their family and friends have rejected them. Often they first meet other transgender people at a Transgender Day of Remembrance event, an observance held every November 20 in cities across the world honoring trans murder victims. Annually, almost all of the victims are trans women of color like Gia.

And this year isn’t offering any reprieve: With a month left to go, 37 transgender people have been slain in 2020, making it the deadliest on record for transgender people; 2017 previously held that ominous record with 31 murders, according to the Human Rights campaign.

This year, however, the Transgender Day of Remembrance is different for Gia and her mother. Fisher has just released her film “Mama Gloria,” a documentary about 75-year-old Gloria Allen, a Black trans woman in Chicago who has defied the statistics that Gia and so many trans youth may have felt were inevitable. Allen has lived her life unapologetically, embraced and supported by her family, and she has shepherded countless youth through their own transitions as an advocate working at Chicago’s largest LGBTQ+ community center.

Fisher found Allen through E. Patrick Johnson, a renowned LGBTQ+ professor at Northwestern University, who suggested that Fisher ghostwrite Allen’s memoir. Fisher, who lives in Connecticut, happened to be Chicago-bound with Gia for an event for trans youth when she learned of Allen’s story a few years ago.

Fisher is a veteran journalist and filmmaker, and she has written and produced a number of documentary films and TV segments. When she met Allen, she knew right away her story could not be confined to a book. She was astounded no one had made a documentary about her.

“It was instant kismet,” Fisher said. “We just could relate to one another. I think for me, it was really seeing this relationship she had with her mother. I knew how special that was to her, what that meant to her in her life, and how it carried her through her life. I have that relationship with my daughter.”

And Allen’s uplifting message is needed more now than ever.

“This is the film that I wanted Gia to be able to see before,” Fisher said. “But it’s also the film she needs to see now as she’s growing up and is about to enter the world on her own, to know that she can have a long, meaningful life like Gloria — that things don’t have to end in violence.”

Allen grew up in 1950s in Chicago and came out as transgender in the days of the Stonewall uprising. The love from Allen’s family was unfaltering. Before Allen came out, her mother — who suspected Allen might be sneaking into her closet to try on clothes — hinted over the dinner table that another woman must be in the house. As Allen took the first steps toward embracing her femininity, the women in the family coached her.

“I had my mother and grandmother and great aunt there for me,” Allen told The 19th. “I was glad that these women were so strong. And so caring about me.”

Allen’s mother was by her side when she recovered from gender-affirming surgery. Allen and her cousins, still close, are now navigating aging together. Even her extended community — her high school friends, including her prom date — remain in her life. In “Mama Gloria” they repeatedly state that she was always Gloria, even before she told them she was.

Allen’s life was not without turmoil. Other kids teased her relentlessly. During her sophomore year of high school, four boys followed her home from a theater and abducted and raped her.

Early in her transition she fell in love and moved in with a man Allen described as “beautiful,” but dangerous. The two spent a decade together, and Allen said he terrorized her for half of it, beating her relentlessly if he found an undusted surface in the house. She said she finally left after he tried to kill her.

“I hit walls that were up against me, but I pressed through the walls and made myself known to everybody because I’m not ashamed, and I want people to know that,” she told The 19th.

These are the stories she passes along to trans youth today. Allen made a career as a licensed practice nurse at the University of Chicago, but her life’s calling was perhaps in her work with youth at Chicago’s LGBTQ+ organization the Center on Halsted.

The Center, which shares its lobby with the dining area of the adjoining Whole Foods, is one of few indoor places in the city where LGBTQ+ homeless youth can sit for free without a time limit. It’s also a favorite place for LGBTQ+ seniors in the neighborhood to have lunch, which is where Allen first conceived of her now-famous “charm school.”

The idea came to her over lunch one day with some friends, she said. The lobby is often bustling with the chatter of young people, and as Allen was eating her lunch she noticed a group of “rowdy” trans teens “exposing themselves” and causing a scene.

“I went over to them, and I told them they need to behave and be ladylike,” she said. She told them to go clean up and not to come back until they had put on something decent.

That’s when, she says, a bell went off in her head. “They need some charm.”

Allen decided she would teach these young kids manners. She thought about how her mother, grandmother and aunt had helped her navigate femininity, and decided she could do the same with some good old-fashioned lessons in “charm.” She took the idea to the Center’s youth director. The Center’s CEO Modesto Tico Valle signed off on the program.

Allen didn’t just teach the youth about manners, but about hormones, safe sex, makeup, drugs, alcohol and self esteem. She talked about navigating healthy relationships and preparing for gender-affirming surgery.

Boystown, the city’s gay enclave, offered myriad programming and resources for LGBTQ+ youth in the early 2010s. In addition to the Center, homeless service provider the Night Ministry operated a drop-in shelter. Howard Brown, the city’s queer health provider, was running a host of youth programs out of its Broadway Youth Center. But charm school was unique, because Allen wasn’t a counselor or service provider. She was, as many in the queer community put it “chosen family.”

“It’s so antiquated,” said Fisher, laughing. “Manners? Really? When you need a home or a bed? But, you know, it’s not about manners. It’s about love. It’s about somebody who hears these kids and loves them for who they are. It’s about caring, mothering.”

Charm school undoubtedly inspired the youth that Allen worked with, but the program had a further-reaching impact than Allen intended.

In 2012, Chicago Tribune reporter Dawn Turner Trice profiled Allen and her program. The article inspired Philip Dawkins’ play “Charm.” In 2017, celebrated actor Sandra Caldwell auditioned for the part of Mama Darleena, the lead based on Gloria. It was Caldwell’s first audition as an out transgender woman — and she got the part.

Fisher’s film is an antidote to an otherwise bleak year for transgender Americans, who are facing staggering rates of violence and still reeling from four years of policy rollbacks under the Trump administration.

“This year, we reached two grim milestones — the Human Rights Campaign has recorded the most deaths of transgender and gender non-conforming people of any year since we began tracking this violence, and we have documented more than 200 total deaths,” David said in a statement to media.

Experts are unclear why this year’s violence has hit an all-time high, says Christina DeJong, an associate professor at Michigan State University who studies violence against transgender people.

The nonpartisan Council on Criminal Justice found that homicide rates among the general population spiked dramatically as the pandemic set in; killings rose by as much as 37 percent in cities from May to June. Transgender murders followed that trend, with 10 murders spread out across less than 60 days.

Those homicides, however, also follow another pattern that has long troubled advocates. June, historically celebrated as Pride Month, often sees an uptick in hate crimes against LGBTQ+ people. Last year, when celebrations honored the 50th anniversary of the Stonewall uprising, the New York City Anti-Violence Project reported that transgender homicides tripled. In 2019, anti-LGBTQ+ protests soared in what the organization feared was a backlash against queer visibility.

Conversely, the pandemic in 2020 has forced many transgender people into the shadows, says Zahara Green, executive director of the trans advocacy nonprofit TRANScending Barriers Atlanta.

Even before the pandemic, transgender people faced three times the unemployment rate as the general population, according to the 2015 U.S. Transgender Survey. Green says COVID-19 has exacerbated that inequality and pushed transgender women of color, in particular.

But the big question, and one of critical importance, is why gender and race are such a particularly dangerous intersection for Black trans women. This year, Black women make up two thirds of the victims, according to data from the Human Rights Campaign. People of color make up 78 percent of the total victims for the year.

“That, to me, as a researcher, is the overwhelming part, that so many of these victims are women of color,” she said. “What are the factors that really lead to that? How does their race increase their risk so much that we so rarely see trans White women who are murdered?”

Green is asking another question this year: How, when you have to honor so many dead, can you support those living?

“I think it’s nice to see these great stories of what’s happening around the world,” Green said. “But I think it was also important to point out that it’s not enough to address this issue.”

In “Mama Gloria” that balancing act is present throughout the film In all her success, Allen still cleans houses to get by. She lives in senior housing in the literal shadow of The Center. She’s on a fixed income.

At a Transgender Day of Remembrance event in Chicago, a young person introduces Allen. “As the cliche saying goes, you cannot know where you’re going until you know where you’ve been,” the youth says.

Allen steps up and gives her own intro.

“I’m known as Mama Gloria,” she says. “And I’ve been here since the prehistoric existence.”

This article was reprinted with permission from 19thnews.org.

"For residents of the Tri-Cities, bridges are a natural symbol of unity." — Henry Hopscotch 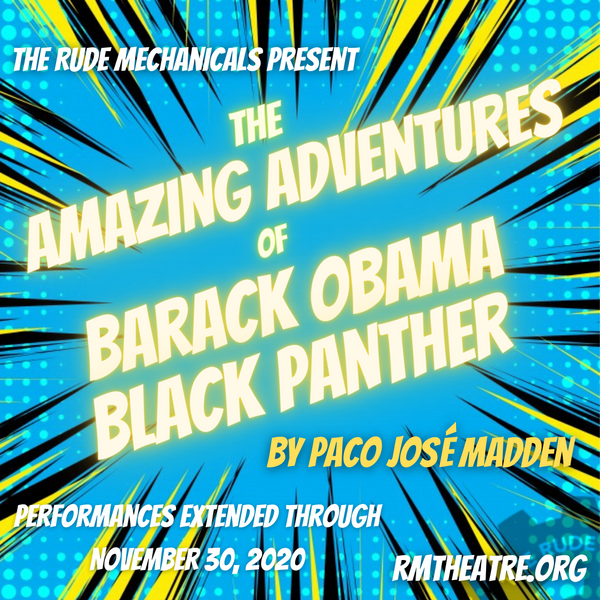 The Amazing Adventures of Barack Obama Black Panther will make you laugh even while it makes you consider important issues.