Skulk Hollow is an asymmetric tactics/skirmish game built specifically for two players. In it, one player takes on the role of a fantasy army of foxes protecting their city against a Guardian—a massive beast terrorizing the countryside (controlled by the second player). The game is played on a 3x3 board with the Guardian lair on one end and the foxen city on the other. In addition, the Guardian itself is a secondary board that foxen units will leap onto and assault (think Shadow of the Colossus in a boardgame format). The player who is able to meet their individual win conditions—usually defeating the opponent Guardian or foxen leader, though there are alternative win conditions—wins the game.

To start, players decide who will take on the role of the foxes and who will play the Guardian. Then each player chooses what specific role they’ll take on for their side. The game comes with four foxen leaders and four different Guardians to choose from. The foxen leaders have unique special abilities to help their army, and the foxen player will begin with their chosen leader and a sentinel card deployed. Each Guardian has their own deck of action cards and a bunch of other unique kit that I’ll talk about in the component section below. Players place their figures in their respective starting areas and draw up to their hand limits. The Guardian player may have a bit of additional setup depending on which Guardian is in play. Play always begins with the foxen army.

During their turn, players perform a number of actions as denoted on their player board. For the foxen player, actions are comprised of playing a card and performing the action it allows, or preparing (discarding a card and drawing two more). Cards permit the foxen player to deploy a unit; have a unit perform an action like movement, leap, or attack; or collect energy cubes which allow deployed units to perform additional actions beyond the player’s action limit. A unit’s leap action will allow it to climb upon the Guardian itself so that it can begin attacking different parts of the Guardian, and in doing so, begin removing available attack actions from the Guardian.

The Guardian player’s turn is similar: they can play cards to perform an action, and work toward attacking the foxen army’s units. The actions a guardian can make may be restricted during game play depending on where the Guardian has sustained damage. Each of the Guardians has a different series of actions providing a lot of unique strategic opportunities and a ton of replay value.

As for components, it’s really hard to find fault in Skulk Hollow. All of the player boards are illustrated beautifully, made of either thick chipboard or glossy card stock. Figures played on the game’s boards are either little wooden meeples in the shape of a fox (using color and iconography to discern which unit is which) or a giant wooden meeple representing the Guardian. There are five tuck boxes to hold player components—one for the foxen army, and one for each of the four Guardians. Each tuck box comes with a deck of action cards and all of the wooden meeples and markers necessary to play that role. Information is clear and easy to find, and a reference card is provided for both the Guardian and the foxen army players to understand what their opponent is capable of.

The only real issue we had was that it would have been nice if card iconography had been abstracted to communicate what an action did as opposed to what it looked like. For instance, a Guardian Grak’s swing ability is represented by a stone hammer. What swing does, though, is damage one opponent figure in the same ground space as the Guardian. While there’s a little bit of abstraction on the reference card for the Guardian, having it on the action card would have prevented having to constantly look up what moves did as we played our first games.

All in all, though, Skulk Hollow is a quick to play, easy to set up and tear down, attractive skirmish and tactics game for two players. With the variety of foxen leaders and Guardians to play and pair against, as well as the distinct potential for expansions, there’s a lot of gameplay in the box.

Am I happy I bought it?: We actually got this one as a gift, and I’m very pleased to have this in our collection.

Written by Brendan Quinn; President of Tri-City Area Gaming. We’re playing games on Discord while COVID’s keeping us home, come play with us!

“Less than a block away from her house He’s been following me from the bar Why didn’t I pretend I lived closer Every turn signaled, speed in check, I can make it...“ 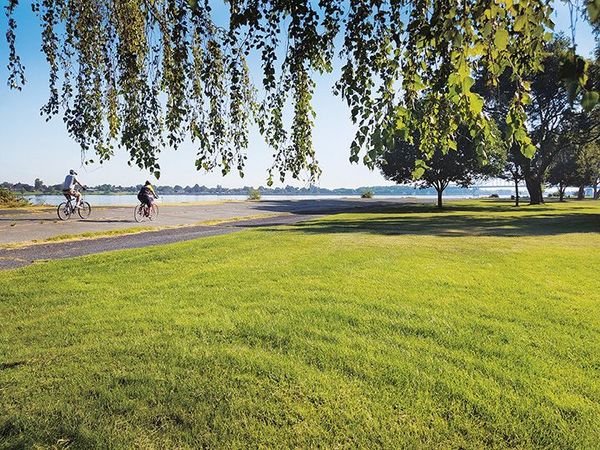 “Our membership is composed of individuals from smaller, more focused community groups, like Audubon, Bike Tri-Cities, Tapteal Greenway, and Friends of Badger Mountain, among others, who work to preserve the livability value of our local designed and natural landscapes (and you can join us, too!).”