Wheelhouse was honestly my attempt at engaging our community—to realize our important and common interest in a bike community in the Tri-Cities.

Why did you form it as a cooperative non-profit?

There's a lot of great information online about non-profit bicycle collectives. I felt that something like that could really benefit our community. So, with the resources of having a retail bike shop and some people that seemed motivated at the time, I just took the risk of converting a retail shop into a nonprofit.

The intent of making Wheelhouse a cooperative was to [provide] a hub for a diverse bicycling community. I made it a cooperative so that different people could see that they have bicycling in common, even if it's a different kind of bicycling than they do. At the end of the day, someone that uses a bike for transportation actually has quite a bit in common with a person who uses it for exercise or recreation. We all need space and safety to participate in bicycling. And that extends to at-risk people in our community, whether it's a veteran confined to a wheelchair or kids having to walk or bike to school. Those commonalities are really important. People have realized that this humble bicycle is a very capable tool for both transportation and recreation.

A lot of people came through my door in downtown Kennewick who needed used parts and the ability to work on their bike themselves because they didn't have the money to have their bike repaired by a local shop, or the tools and skills to do it themselves. Wheelhouse equips them with both the skills and the tools.

Two things that Wheelhouse has worked hard on is to connect with and give access to this inexpensive and capable means of transportation for children and adults here who are immigrants, refugees, or homeless.

Bicycles have a long history of being very powerful tools for social change. Some people discount the bicycle as recreational or a toy. But the reality is that it's a very subtle, powerful tool. And it has the capability of making a lot of change. As the saying goes, the bicycle is a simple solution to some of the world’s most complicated problems.

What is your vision for the Tri-Cities?

Our community has a long history of biking, and I think that it would be an even better community if we just accepted that and allowed the biking community to grow and evolve.

What are some of the challenges in realizing that vision?

Working on Wheelhouse is a unique challenge. It wasn't really my intent when I started a bicycle business. My intent was to bring something unique to what I considered a growing bicycle community. But I became aware, especially in downtown Kennewick, that there was also a lot of need for more of a social and community-accessible space.

Interaction, and understanding the value of the people in the community, didn't come until I had a bike shop where people chose to actively participate—where people got excited about having music in a bike shop, of all things. And people got excited about used bicycles and about using bicycles. That’s how I got engaged with a lot of local artists and local doers and thinkers and conservationists and musicians, and really learned the depth of this community.

Unless there's a really strong community that understands the needs of bikes and their ability for social change within a community, it can take a while to really get going with a community bike shop, particularly for a community with three separate towns, each with its own character.

Which values would you say drive your leadership of Wheelhouse?

I go back to what you were asking me about Wheelhouse. It's more about the people than it is about the bike. A bike is a vehicle to help people.

The value is giving people a tool that can give them more opportunity. I believe that our purpose is to improve the community that we're in, to do what we can to make our community better. I like this community, and so I'm trying to do something that makes it better. The goal was to do something with a positive impact that superseded myself.

If we engage children at an early age with positive experiences on bikes, then they're more likely to share those experiences with their kids. And that is when you have a cultural shift.

I'm hearing a strong value in making your community a better place. I'm just curious, where did that come from?

That's a really good question. You know, I can trace it back to the way I was raised. My dad is a teacher and my mother worked in a doctor's office. But we were poor when I was a kid. Even though my parents worked very hard to make sure that it wasn't obvious, I often wore hand-me-downs from a family friend. Yet we always had food on the table, even if it was a crock pot of beans that we ate out of for an entire week. They really taught me how to live with very little.

As a kid, I wanted to pick every flower and pick up every rock. I can hear to this day my parent’s voice saying no, no, you want to leave that there! Because if everybody picked one, there wouldn't be anything left. I think that’s actually what inspired my photography early on, to collect things without creating [a negative] impact. Whether or not they realized it, my parents were instilling conservationist values in me, living very simply and reminding me that leaving those rocks and flowers where everyone can enjoy them is very valuable. So, low impact has been something very important to me. That's why a bicycle is so important to me; it's probably one of the lowest-impact forms of transportation in a community or an urban environment.

So, what would you say are your greatest strengths?

Wheelhouse’s strength is its community, the people who come to it. I'd say that my greatest strength is finding people who I think have common interests and great abilities and introducing them to each other. And then things happen.

I like to talk about our area as a desert. So, what you see on the surface might not look very exciting, but our roots are deep. And when you actually see what's under the surface of the ground, when you look closely, we have extraordinary depth in this community.

How do you want to be remembered?

I would rather my legacy be the thing than the person. If there's a memory, I think I would rather it be “This is a really cool bicycle community. How in the world did they ever get there?” 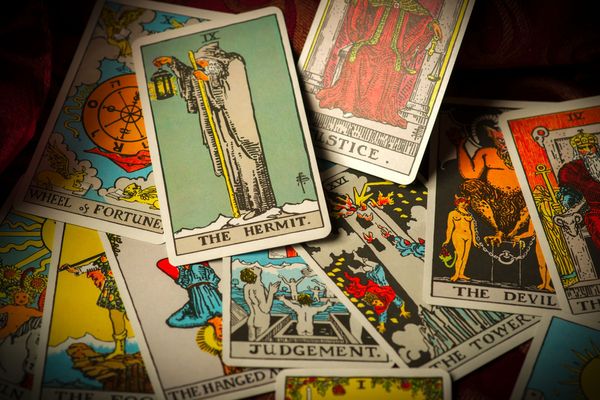 “The message for this tarot reading is to keep creating change and to take care of ourselves the best we can so we can be there for our community.”

“Comic books are really, really good, Aquarius. It’s time for you to start getting really, really into them. Not the superhero ones. The really weird ones.”