I have been attracted to men and women for as long as I can remember. I dated men my whole life, married two, and divorced one. The divorce had nothing to do with my sexuality; things just did not work out. I did not even realize I was bisexual until a few years ago.

My first recollection of feeling attracted to women was when I was around 10 years old, and I discovered Playboy magazines on the back of the toilet in my parents’ bathroom. As a latchkey kid, I had the access and freedom to leisurely peruse the magazines after school before my parents came home. I liked gazing at the women while being fearful I might be caught looking at a magazine with naked pictures. This concern made me careful, but it did not stop me.

My parents ordered cable early in its availability, and in 1981, the song “Centerfold” was released by the J. Geils Band. When I saw the video on MTV, I was mesmerized by the women in their skimpy and beautiful lingerie outfits and felt a mix of excitement and guilt. With cable also came the Playboy channel, which (because my parents did not order it) had a distorted picture partnered with the false moans of pleasure. I would occasionally watch (well… listen) when left alone. I didn’t realize at the time that what I was experiencing was attraction to women. I was more focused on worrying about being caught engaged in something inappropriate.

In college, I was drawn to and found kinship with a friend group, many of whom were openly gay and lesbian, at least within the group. One night when alcohol supplied liquid courage, I verbalized my attraction to women for the first time to a gay member of the group. He told me something to the effect of, "You are not attracted to women." I was stunned, thinking I had confided my blossoming truth to someone who would understand and support me. A transformative moment was stolen, because I respected him and assumed he knew more than I did. The whole interaction made me feel guilty about my feelings toward women. Having been shut down, I doubted the validity of my attraction and did not mention it again for over 30 years.

I spent the summer after my college freshman year in a house where I had occasional access Playboy magazines. I savored the moments when I could steal a peek at them when left alone. I dismissed my actions as unimportant — not true attraction to women — because I had been told, “You are not attracted to women.” I still feared getting caught by my housemates, but now there was an additional layer of guilt because I thought I should not have these feelings.

Around 10 years ago, while traveling out of town, a woman approached me in a grocery store, and we chatted informally. I did not think anything of it until my second husband suggested she was flirting with me. I brushed it off while quietly pondering (and celebrating) the idea that a woman might be attracted to me. He and I never spoke about it again, but I did feel surprised that a woman might think of me in that way.

Growing up in a socially progressive church, I learned to accept people for who they are. That lesson is one of the most important of my life, and I consider my easy acceptance of others to be one of my greatest strengths. This attitude led me to comfortably interact with LGBTQ+ folks through college and beyond. However, in my formative years, I did not know anyone who was openly LGBTQ+, nor did the sex education I received at school, at church, or from family members include information on the topic. I embraced members of the LGBTQ+ community as an ally even though I did not see myself as a part of the community.

As an adult, I listened one-on-one and in small groups to local youth speak about their gender and sexual orientation while encouraging them to be true to themselves. Some came out to me before their parents, and I became known in my community as someone who was safe in which to confide. Perhaps word was passed down from those who felt supported by me to others who needed a safe place to discuss their feelings.

Ironically, I lived through all of these experiences while considering myself a heterosexual. It was not, however, out of shame; it truly did not occur to me that I was bisexual. I had always dated and been with men and was satisfied with those relationships. In hindsight, I suppose the heteronormative culture in which I lived impacted that. I was never presented with negative opinions about the LGBTQ+ community, but I did not ever receive factual information, either. I was not equipped with language which described how I felt. Open and non-judgmental conversations and education would have helped me explore, understand, and accept my sexuality, and might have helped me recognize my bisexuality earlier in life.

My daughter came out to us as bisexual a few years ago; we embraced her and her girlfriend unconditionally, and they eventually married. Her declaration reopened my mind and heart to the possibility I might be bisexual, as well. I pondered it for months, and finally, after heartfelt deliberation, gently verbalized to my husband, "I think I am bisexual.” We spent much of that summer contemplating together what that meant for our relationship. He was cautiously supportive, fearful I might leave him to explore this aspect of my sexuality. It took many months, but I believe he now is secure in my commitment to our relationship.

Coming to terms with this revelation has been freeing. While not uncomfortable with the label ‘bisexual,’ I worry about people in my community changing how they think about or interact with me. I fear losing my status as a community leader, and I worry about my friendships. I have shared my bisexuality in casual conversation with people who I know will be non-judgmental, and I appreciate having bisexual friends with whom to talk about it.

A few months ago, towards the end of a family gathering, my granddaughter handed me her phone with a message for me in her Note app. It read simply, “I am bisexual.” I read it, looked up at her, smiled broadly, and said, "Me, too." We embraced tightly, and I whispered in her ear, “I am glad you trusted me with your truth. I am here for you, always.” Since then, we are a bit closer, and even though we have not discussed it again, she knows I am a safe person to talk with about the topic.

In the past several years, I have learned to write when I need to process and organize my thoughts and/or feelings. When I received an email with the call for submissions for the June Tumbleweird Pride issue, I reached out to the editor, Sara, and asked if I could write anonymously about my journey and acceptance of being bisexual. I worried that remaining anonymous would be counter to the idea of ‘pride’ month. She replied, “…You don't owe coming out to anyone. Coming out is for you, not for them; it's only something you should do if you feel safe and ready. I feel VERY strongly about this. I would love to see what you have to say anonymously….”

Writing this piece has helped me accept this aspect of my personality. It also helped me understand where my feelings of guilt may have stemmed from. When I had taken a risk so many years ago to talk with someone about my attraction to women, I had been told I was wrong. That experience unseated me to the point where I could no longer reconcile what I should feel with what I did feel. I did not feel safe opening up to others for fear of the feedback I might receive. Looking back, I wish someone had told me that my attraction to women was valid and acceptable.
I suppose I feel safe and ready to come out to people I trust — and anonymously to the rest of the world. There may be a time when I am confident enough to stop worrying about what others might think and openly express who I am. But for now, coming out to myself, my family, and the friends with whom I feel safe has been an important step in this process.

During this Pride month, I choose to accept and celebrate that I am bisexual.

"I like the idea of smashing ideas and feelings and high fashion together." 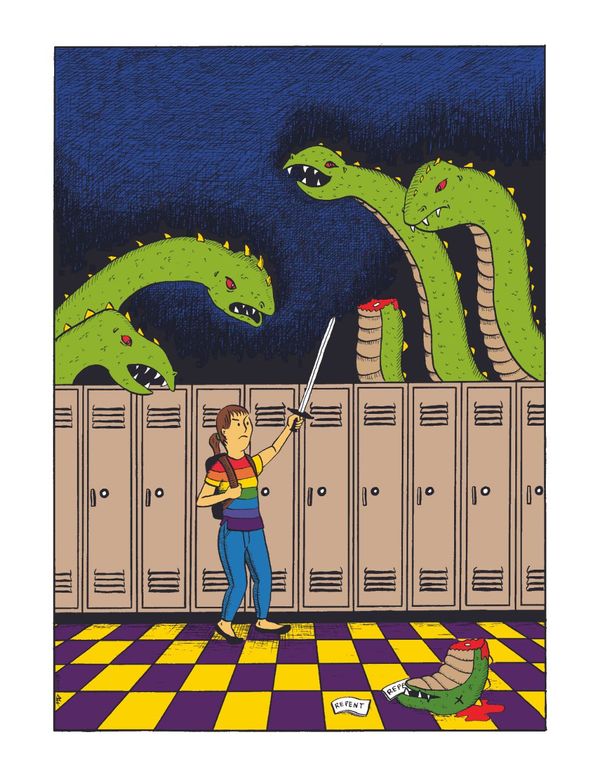 “Respect doesn’t mean you have to understand everything yet or throw away your beliefs.”