There was no denying it — the old castle called to Gen. He felt it as keenly as he felt the stubborn pains in his spine that spread like roots into his aching limbs. There was also no denying that something was deeply wrong with his employers: never seen by any of the other housekeepers, only speaking in short, terse letters left on kitchen tables or in passive-aggressive movements of cleaning tools. Most of the staff merely cursed their names and kept working for sorely-needed coins. Gen held their same suspicions, but held his tongue so he could hold onto his own personal treasure.

Every day he found it: words of praise for a job well done or reprimands for poor work written on the walls in a script no one else could read when he pointed it out to them. Before long, rumours sprang up about him as well, and he never attempted to show anyone the writing again, preferring to savour the little treat on his own. He called it Scrawl.

Tonight, the Scrawl’s tone had changed dramatically, leading him up the astrolab’s many steps, praising him when the pains in his knee became too much to bear and encouraging him to open the astrolab door. Inside, a single lantern had waited, a tiny ember clinging to its wick, waiting for him to stoke the flame and see the massive trap smeared onto the wall before him.

The Scrawl had woven itself into his limbs as easily as each letter had slipped into its neighbour on the stone above him. Gen hadn’t even time to gasp as his entire body went rigid, transforming into something like stone or half-dried amber, his own skin a cage locking him in.

Gen had been trapped in himself for hours, exhausting himself throwing his whole weight into attempts to fling a limb out or force himself to collapse as his body began to ache. Between rounds of struggling, his eyes darted around the room of the tower that had haunted him for so long. It was clean, disturbingly clean, when compared to the rest of the castle’s dilapidated state. All around him, little bioluminescent moths studded the astrolab, their blueish lights fighting the lantern’s glow to illuminate parchments and pens, shining bottles of all shapes and sizes and copper wire twirling around everything like metallic briar. Sometimes the moths landed on him, their soft wings causing an itch to spread across his bare hands and cheeks before fluttering off to land on a new table or bookshelf. Otherwise, nothing moved, nothing stirred, nothing breathed…

…Until the moment the sun drowned under the horizon, plunging the world beyond the tower windows into darkness, and something came to life inside the astrolab. Gen couldn’t see it, couldn’t hear it, but he could feel the ripples of magic in the air. Abruptly, the spell dissipated with a thin whisper and his legs turned to jelly. With a grunt he crashed into a plush chair that hadn’t been behind him before.

“Now, now,” a voice said. It was so deep and soulful that Gen thought he could have wrapped himself in it like a blanket. Massive hands grasped his shoulders on either side and he froze, breath catching in his throat. Slowly turning, he beheld the beast behind him.

The man — the Lord, for Gen could instantly tell it had to be the Lord of the castle — looked like he was in the middle of stepping from middle age to old age, his dark skin lined with wrinkles and thin, wire-rimmed glasses curling around his eyes. A fine layer of dirt dusted his clothes and had been sloppily wiped from the lenses of said glasses, leaving behind uneven streaks. Gen wanted to be afraid of him, every rational part of his subconscious telling him not to trust this man. And yet, he found himself doing so unconditionally.

“He looks… pastoral,” a second voice said, feminine and shrill as a frayed violin string.

“Still a bit raw in the middle, I agree, but I’m sure we can resolve that,” the lord replied, his bespectacled eyes never leaving Gen’s.

Gen breathed in slowly, his brain warring with itself as half of him screamed to trust the pair while the other screamed to run away. “Who… who are you?” It was a stupid question — so, so stupid, but it was all Gen could think of.

“I am Lord Konstantin, and this is my beloved bride, Mirjana.” The man peeled one of his soft hands from Gen’s shoulder and pointed, leading Gen’s gaze towards a similarly dark-skinned woman wrapped in the golden glow of the lantern. She was tall and slim, with long, withered fingers, and a long braid crowned with her first shining grey hairs. Distractedly, Gen noticed that dirt similarly dusted her clothes.

Staring at them, in this place and this manner, Gen knew what they were, and he’d always known what they were. He knew why his brain felt glazed over with false trust for these two, why they only came out at night, and why soil dusted their skins. Knowing didn’t dampen the fear forcing Gen’s heart to hammer in his chest, however. He was so sure of it his heart froze in preparation, his final breath catching in his throat.

“Please?” The hand returned to his shoulder, then crawled up his neck to curl under his chin and force him to look up.

“Please…” It sounded as pathetic as it felt to say. Gen’s throat tied itself into a knot as he stared up at the Lord. “Don’t… kill me….”

“Oh?” The Lord’s hand forced his head back further until he couldn’t see anything but the Lord’s silhouette painted in the golden hues of lantern light and the tiny, blue sparkles fluttering around him. “We have far more exciting plans for you, my little mage.”

Gen’s blood turned to ice while his chest tightened as if a massive hand wrapped itself around his ribs and squeezed. He tried in vain to shake his head in the Lord’s grasp, tears running down his cheeks. “No… Oh god, no, anything else.”

Lord Konstantin muttered a few empty, seemingly incomprehensible words, patting Gen’s cheek. Suddenly something about the words themselves clicked into place: they were Scrawl, spoken aloud rather than written in dust or smeared on stone. Gen gasped again, the meaning of his own hasty words unknown until they echoed around the astrolab.

The Lady (Mirjana, Gen reminded himself) stalked over and grasped one of his calloused hands in her own soft, cold ones. “Oh, darling, but it's such a joy, such a privilege to be born with such power. And such good fortune we were the ones to find you and show you our world.”

“Our shared gift is rare, my boy,” Konstantin said, and as if on cue, Lady Mirjana reached forward, taking one of her husband’s hands and pulling it forward. Gen stared, stunned at all the Scrawl tattooed on the Lord’s skin.

“My poor Konstantin used to have fingers as crooked as a church roof, but he learned just the right words to command his hands to snap back into place.”

Konstantin squeezed her hand before leaning forward to tuck a piece of hair behind her ear, sandwiching Gen between the two. “It was nothing but a warm up compared to your spine, dear.”

“Spine?” Gen asked, dimly aware he was speaking Scrawl, his own pains flaring at the mention.

“I was trapped, watching helplessly as my body collapsed into a tighter and tighter coil. Towards the end, I felt my own bones trying to crush me from the inside-out, and then...” Sighing heavily, she stared into the distance, recalling her old pain. After an eternal moment, she looked up, her expression transforming into awe as she gazed adoringly at Lord Konstantin. “I felt wonderful.”

“I saw the glint in your eye,” Konstantin said reverently, “And I knew I had to save you, no matter the cost.”

“Even if it took years,” she said, smiling warmly at him.

“All of it was worth it in the end, to see you stand tall and by my side.”

Gen felt their tenderness wash over him, softening him up like worked clay. He knew he should have fought the feeling. He should have screamed, spat, and clawed to get free of their grasp at any cost. But it would be perfunctory, a show of how he could have said no before handing himself over to their charms.

“And… if I say no…?” He knew he wouldn’t. All he could think of was a day when he could walk. With ease. On impulse. Without thinking constantly of aches and salves and rest and how much further he could push himself before the cost became too high.

The silence was chilling. Mirjana looked to her husband, but Gen could not read her frosty expression. Neither of them spoke, neither of them moved. Then, she slowly turned back to him, her gaze soft and tone airy.

“I suppose you’ll… merely continue to clean. Perhaps you’ll stay once the work is done, perhaps not,” Mirjana said. “Is that what you’ve planned to say from the beginning?”

“No!” Gen jerked forward, unable to bite back the word. “No, I— I want this. I want this now.” All he could think of was his pain. The hard, sharp pain that ground up his knee and into his hips and twisted his spine until all he could do was throw himself to the dirt in agony.

“Now,” he snapped, then flushed with embarrassment. “I mean… Please, my Lord and Lady, teach me.”

Gen could feel Konstantin running his hands down his spine, feeling all the little bones slowly beginning to veer off course. The instructions seemed to come to Gen out of thin air. He peeled off his shirt, leaned forward for his Lord, and rested his head on his Lady’s shoulder as all the aberrations of his spine were outlined by another’s hands. The Scrawl was applied painstakingly with sharp-edged fountain pens, the words coming to him far too complex for him to understand as they marched up his spine and into his brain. But the Lord and Lady told him to be patient and he trusted them, all while more and more Scrawl covered his back and crawled down to his crippled hip, thigh and knee.

The moment the spell was done, Gen gasped as the ink seemed to stab into him like a thousand needles, slowly grinding into him. They shattered his bones from the inside-out, jerking the shards back into place as he let out a scream and drowned in the pain, blinded and choking on it as he desperately hunted for a way to break the surface.

Distantly, he felt Konstanstin and Mirjana wrap their arms around him, running their hands through his hair and muttering sweet nothings as his body snapped itself into a proper shape.The glaze of tenderness and trust crashed over him through the depths of the pain, and he knew that when he could stand again, he would run into their arms. All of it would be worth it. To walk. To be with them. Even if he’d never wanted it.

Deckard-Lee Schaefer is a ghost who haunts a 2008 HP Pavilion laptop someone illegally dumped near their body. 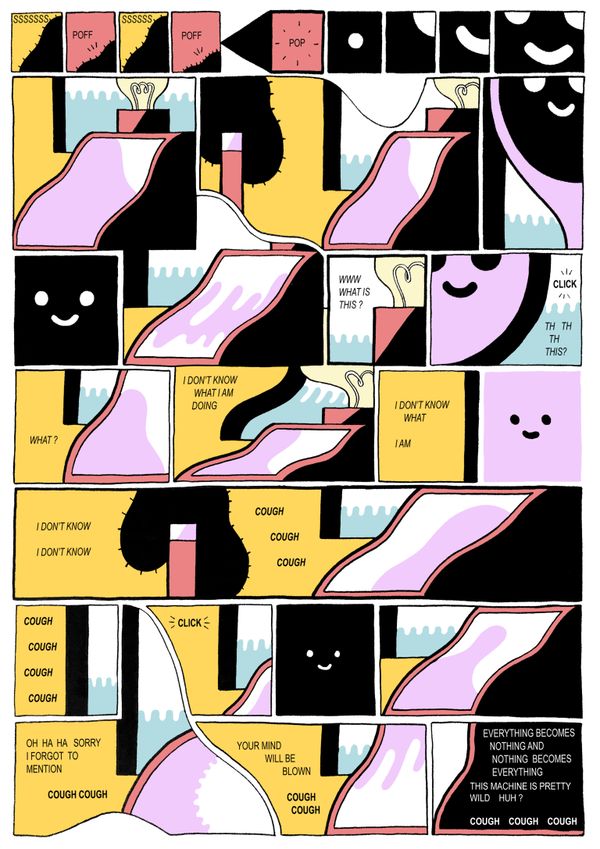 Enjoy our roundup of Art and Poetry from November! 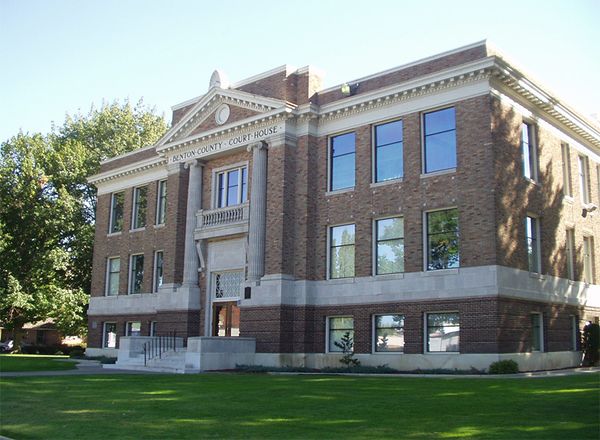 What is Benton County doing with COVID relief funds?